TechBullish is reader supported. When you buy through links on our site we may earn an affiliate commission. Learn More.

Logitech G304 and G305 are similar mouse offerings from Logitech, of which I was curious to find the difference. Logitech G-Series is the Gaming series of Logitech mice and is crafted exceptionally well for Gaming performance.

The G304 and G305 are the colored high-performance mouse from Logitech Gaming and have the Logitech HERO Sensor technology for tracking and LightSpeed USB Receiver.

In this post, we will look into the comparison of G304 vs G305 and find out whether there are any differences and which is better. 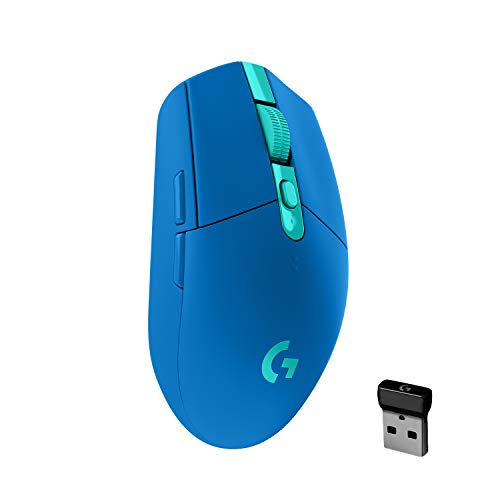 Logitech is always a step ahead in the innovation they provide in their peripheral segment. The HERO sensor they developed for the premium mouse is a real breakthrough of sensor design used in any mouse previously.

According to Logitech, HERO is a true breakthrough in performance-to-power ratios, bringing forth a new generation of high-performance and long-lasting wireless gaming mice.

HERO pushes past the constraint of existing sensors to set the new benchmark for performance and efficiency, changing the playing field for gaming mice.

Logitech Lightspeed Wireless Receiver is blazing fast with its performance and even better than any wired gaming mouse.

With the Lightspeed Wireless receiver, now the G series of mouse-like G304 and G305 performs flawlessly in any FPS game where performance is crucial.

Both the Logitech G304 and G305 support the G Hub and the support for G Shift.

G Hub is the Logitech Software that helps to configure the buttons, customize controls and control almost everything of Logitech Mouse.

Both of the mice support G Shift, the technology that helps to assign mouse buttons with keyboard shortcuts and macros (multiple keyboard keypress with a configured delay with a single mouse click).

This feature helps games that require multiple button clicks for some advanced tasks to perform in the gameplay.

The performance they offer for gaming is unmatched in every aspect and leads to a perfect mouse for gaming. I didn’t find any shortcomings which are significant to highlight.

The ergonomic mouse lovers or vertical mouse, lovers may not like the design so much.

Also, as this has two extra buttons on the sides, which are for right-handed users, it is not for you if you are a left-handed user.

Due to its compact size, it is not the best option for people with large hands.

Logitech G304 and G305 are similar mice but with different model numbers. In different countries, they are distributed by models.

Choosing anyone between G304 and G305 can thus be good for your gaming.

G304 and G305 are the same mice with different model numbers from Logitech G Series.

Both G304 and G305 come with high performance and power-efficient HERO Sensor technology and Lightspeed wireless technology, making them the best mouse for FPS Gaming.

Logitech G305 comes with a replaceable AA battery which is not rechargeable. Once the battery gets drained out, you can replace it with a new one.

Logitech G305 is a highly lightweight Gaming mouse from Logitech and weighs only 99 grams.

In different countries, one of the two models G304 and G305 would be available to choose from. I hope you have clarified and got the difference between Logitech Lightspeed G304 and G305.

TechBullish is an excellent source to find the updated and helpful computer peripherals guide.

Anirban Saha is the Founder and Editor of techbullish.com. He is an experienced software developer of more than three years in Full Stack Java Development.

He has completed B.Tech in Electronics & Communication from the Institute of Engineering & Management, Kolkata. He has sound knowledge of computer peripherals.
ABOUT ME