Logitech has a long history of making some of the best gaming mice on the market.

The G900 series having G903 and G900 is the premium series of Gaming mice from Logitech, having a ton of customization and precisely made for Professional Gamers.

If you are looking to know the comparison of Logitech G903 vs G900, I have compared it in-depth with my specific review to tell you which will be of better value for your gaming.

I like the Logitech G Series a lot, and I prefer the unique gaming feel and design they provide.

Also, the performance you get is reliable and consistent during your professional tournaments too.

This mouse is a significant factor as you don’t want to see any lags or glitches in competitions and tournaments.

Logitech G903 HERO is power-packed with its ambidextrous design and a modern gaming mouse. It has all the advanced features and customization essential for gaming.

The LightSync RGB colors add the perfect feel to using this mouse.

In terms of performance, I would say it is one of the topmost performers from Logitech. The upgraded Logitech Hero 25k sensor is worth it.

You will feel buttery smooth mouse movements with this wireless mouse. You will not even realize that it is a wireless mouse as it is so good.

You can see in the video the performance of the G903 during gaming in detail. 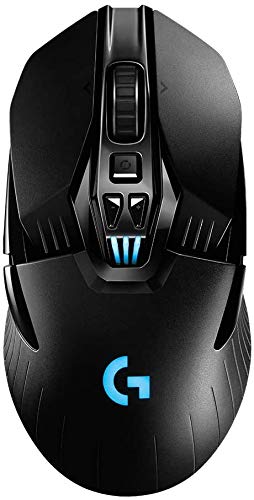 Logitech G900 Chaos Spectrum is an older version as compared to Logitech G903. Still, the performance is worth mentioning.

The sensor of this mouse is gaming-grade PMW3366 and is highly recommended by gaming professionals.

Overall, this mouse is an excellent mouse from Logitech. Though I feel the G903 is a revised, refreshed, and better-performing mouse in all aspects.

In the video, you will find the G900 test during gaming and review. You would know how it will perform during gaming tournaments.

Logitech G900 and G903 are made of high-quality material and are durable. Applying pressure on the buttons even there would survive for long.

The buttons are well placed and durable, and clicking the side buttons is also good to click. Overall the durability looks good, and I have no complaints about it.

The G900 and G903 both are wireless mice but still are great for gaming. Logitech G903 comes with Logitech Hero Sensor.

Logitech Hero sensor is a breakthrough technology made that takes the performance of a wireless mouse at par with any wired mouse during gaming.

They claim that these wireless mouse performances are even better than any wired mouse for any FPS game.

In terms of precision and performance, G903 has a slight edge as compared to the G900. Though this would not be that noticeable.

For this, you need to program the mouse switch to perform the specific operation during the Gameplay.

This setting can be done in Logitech G Hub software.

Hence, macro settings to get an extra edge during gaming, both the G900 and G903 mouse would perform equally.

Both the G900 and G903 look quite similar, and it follows the pattern that the G series of the Logitech mouse looks like.

This gaming mouse has a distinctive and gorgeous gaming mouse look that would keep you standing, and you will feel like this is a premier mouse whenever you would play with this.

G903 is a newer version as compared to G900. However, I like the design of both the mice and they almost look similar.

Are these reliable for Tournaments?

G900 and G903 both are actual performances for any gaming tournaments, and they won’t be any problem if you use them.

The performance and reliability you get In the match are excellent, considering that this mouse is wireless.

Ans. G903 is a newer version as compared to G900. Also, I would say G903 is better than the G900 mouse in terms of performance and specifications.

Ans. No, the Logitech G900 does not support Bluetooth.

Q. How much does the Logitech G900 weigh?

Q. How much does Logitech g903 weigh?

Ans. Logitech G903 weighs 110gm with an additional optional weight of 10 gm attached to the bottom of the mouse.

Ans. No, the Logitech G903 does not support Bluetooth connectivity.

If you already have a G900, then probably yeah, there is no requirement to upgrade that Mouse to G903.

However, if you are considering this mouse for the first time, considering G903 would be better.