Logitech is an excellent brand for wireless mice.

The build quality of Logitech Mouses is great and also they are known for their excellent battery performance.

Logitech M275 and M280 are both wireless mice from Logitech.

Both models have their pros and cons, so it can be hard to decide which one is right for you.

In this article, we will compare and contrast the two models Logitech M275 vs M280 to help you make an informed decision.

Let’s get started with the comparison!

Logitech M275 has a well-contoured design to give an ergonomic feeling while you work with this mouse.

This mouse fits naturally to your hands as the back is elevated.

In terms of performance, this mouse is excellent. You can do your regular tasks easily with M275.

This mouse would not let you down with daily use.

If you use a mouse for long hours then also you will not feel tired due to its ergonomic design.

To know more about the Logitech m275 review, I have a dedicated article on that.

In this video, you would find how the M275 would be in real life.

Logitech M280 has a great performance and comes with a compact shape that would fit naturally into your hands.

The grip of this mouse is excellent due to its rubberized sides.

I liked the texture of the sides of this mouse. The grip is incredible and you will like it very much.

The scroll wheel is very much controllable. If you like to precisely scroll each line of any document then easily you can do that.

This video will find the actual Logitech M280 mouse review and how it will perform in daily tasks.

Both of these mouses have an asymmetric design, and these are curated for right-handed design.

Also, both these mouse comes with an Optical sensor which does not work well on reflective surfaces like glass.

These mouses work well on other non-reflective surfaces like wood, and paper.

Logitech M275 and M280 look similar. Both have an asymmetric shape with a curved design on the side.

The backside is higher to comfort your hand.

The textured rubberized grip on the sides feels good to hold the mouse.

This mouse is not slippery, even if your hands get sweaty during use.

The performance of the M275 is suitable for regular use, and you would not find any lags.

You will feel like you are getting performance similar to a wired mouse.

Logitech M280 is also good in performance and has not any lags during use.

However, I would not recommend the M275 and M280 mice for FPS gaming.

For other types of uses like office use, net surfing, and other things, the performance is good.

The connectivity of the M275 mouse is using the Logitech Receiver.

The same is for the M280 mouse. You can easily connect the mouse using the Logitech Nano Receiver.

Both M275 and M280 connect quickly with your computer, laptop, or smart tv by plugging the Logitech Nano receiver. Both of these mice do not support Bluetooth connectivity.

Durability looks fine, and I have no complaints about the build quality of these mice.

The plastic material on the mouse’s surface is hard and durable. It can easily be able to sustain mild drops.

Considering the features and functionalities of these mice, I found both these mice similar.

There are no significant differences. Only the M280 has a lower weight of 10 g. I would recommend choosing the mouse based on the availability and price.

Here is the Logitech M280 from Amazon. 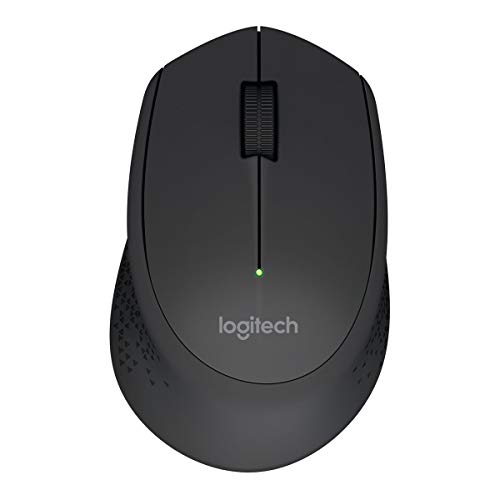 Q. Does Logitech M275 have Bluetooth?

Ans. No, the Logitech M275 does not support Bluetooth connectivity.

Ans. The Logitech M280 is only good for general gaming but not recommended for FPS and competitive gaming.

Ans. The Logitech M280 does not have Silent Touch Technology in it. In M280, the clicks sound like a regular Mouse.

Overall, comparing all aspects, the features of both of the mouses M275 and M280 are similar and you can consider any one of them.

I would recommend the M280 as this is the updated version.

I hope you enjoyed reading this comparison.