In this Kailh Switches Guide, I will take a close look, with a teardown, at different Kailh switches available and their types in detail.

I would discuss different types of Kailh switch variants that would including the clicky switch types, linear switch types, and tactile switch types so that it would be useful for you to make a choice.

Why Should you Trust Me? Hi, I am Anirban Saha, an Engineer having a Specialization in Electronics and Communication Engineering. I have experience in Smart TVs, Electric circuits, and Computer peripherals.

What are Kailh Switches?

Like other switch manufacturers, Kailh also has several variants for their different mechanical switches in their lineup.

Here are the several Kailh Switch variants which have different color variants:

The Kailh Box switches are similar to the Cherry MX switches but with a different internal design.

The Kailh Box switches are made of metal contacts encased in a box, which is where they got their name, and this box gives them their IP56 waterproof/dustproof rating.

Kailh Box White switches are Clicky switches that can be a Cherry MX Blue replacement for you. It has an actuation force of 50g which is decent and has a good life of 80M clicks.

The Kailh Box Navy is another clicky box switch variant from Kailh Box switches, but they have a higher actuation force of 75g. It is a good switch only if you would like to actuate at 75g.

Kailh Box Pinks are Clicky Box switches from Kailh with an Operating force of 55g.

The Kailh Box Jade switches are clicky switches with an actuation force of 65g. It is decent and quite useful considering its Operating life of 80m.

The Kailh Box Pale Blue switches are clicky switches with an actuation force of 60g to operate them. These feel good and can be compared to Mx Blue switches.

It would feel good for typing and gaming.

The Kailh Box Royal Switches are a tactile switch variant from the Kailh brand. They operate at the low operating force of 45g which is awesome. I like the lower operating switches as they feel easy to type on.

These are brown switches from Kailh Box. These require a 60g operating force to actuate. It is well built and good. You can compare it with the Brown Cherry switches.

The Kailh Box Burnt Orange is a tactile switch from Kailh.

Kailh Box Red is a linear switch from Kailh. It has an operating force of 50g and is fast and light to actuate.

You can consider Kailh Box Red for gaming.

Kailh Box Dark Yellow is a Linear switch from Kailh with a higher actuation force of 70g. If you like high actuation force, then you can look into it.

This switch is decent and well-operable during typing sessions.

The Kailh Box Black is a linear switch and has an operating force of 60g. The actuation point is at 1.8mm which is decent. I like these switches and can be compared to the MX Blacks.

Here is a tabular representation to help you see the Kailh Box switches in a glimpse:

Here are the Kailh Box Switches available at Amazon: 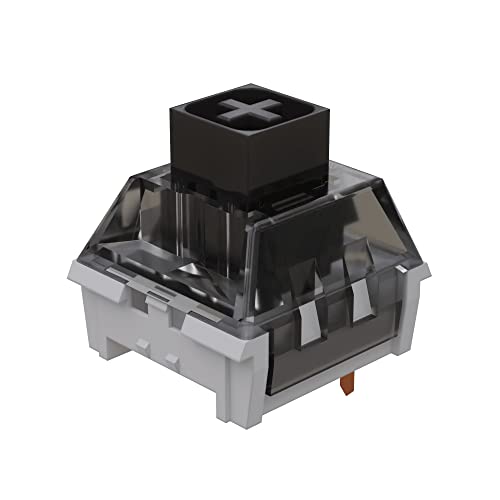 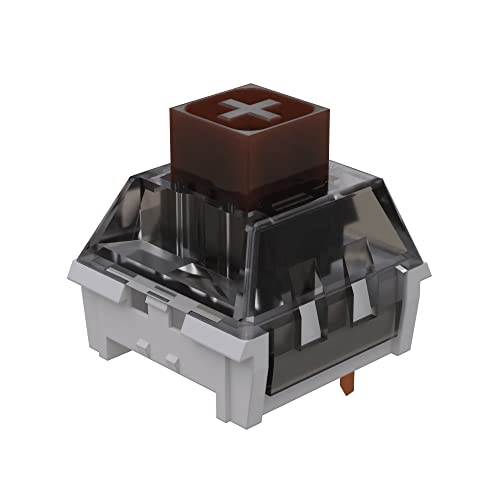 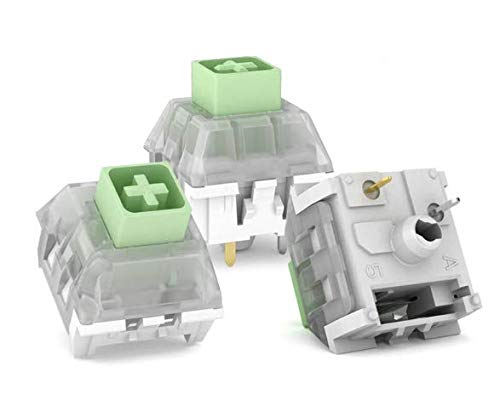 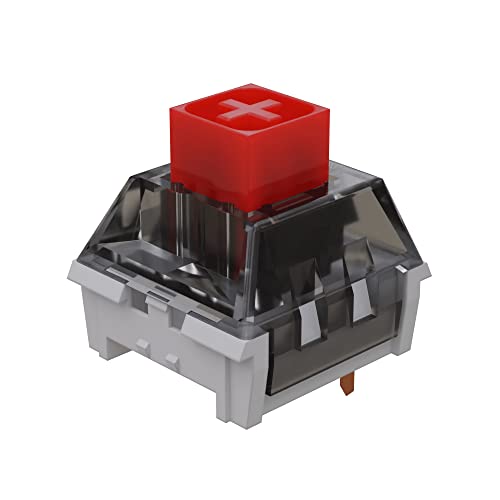 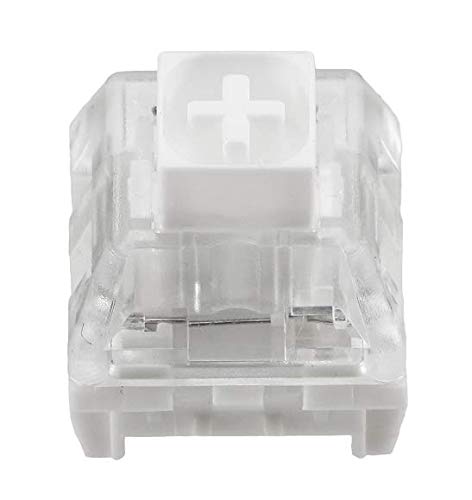 Kailh Speed Switches are a cut above the rest when it comes to gaming keyboards.

Ideal for gamers and typists alike, Kailh Speed Switches feature a housing and stem made out of self-lubricating POM.

Kailh Speed Switches are the next generation of mechanical switches for your gaming keyboard with high precision and responsiveness.

They are built for speed, durability, and responsiveness. Their high accuracy and low latency are what give them the edge they need.

They also feature an MX style housing, shorter travel, and activation points than Cherry MX switches and are currently available in any color you can think of.

They have MX-style housing, shorter travel, and activation points compared to Cherry MX switches. Hence they are good for gaming.

The Kailh Speed Copper Switches are awesome if you are a tactile switch fan and have already heard about the MX Brown switches.

The Kailh Speed Gold switches are of a tactile type and have a good bumpy experience. You would like the experience of using them as they actuate fast.

The Kailh Speed Navy switches are clicky switches with an actuation of 70g force. It is a bit on the harder side to actuate.

Here are the detailed specs about the Kailh Speed switches in the tabular form below:

Here are the Kailh Speed Switches available at Amazon: 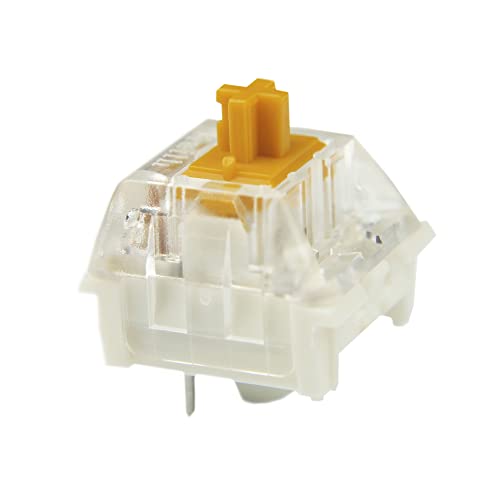 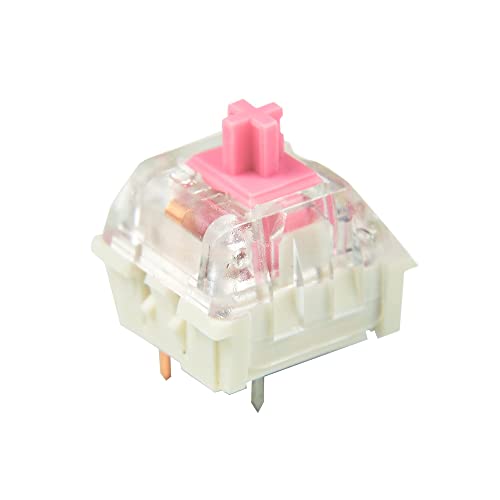 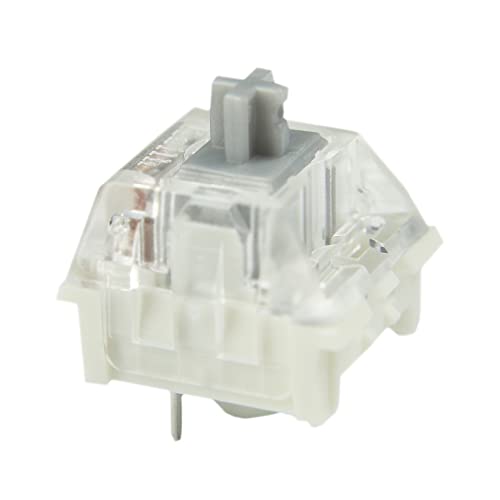 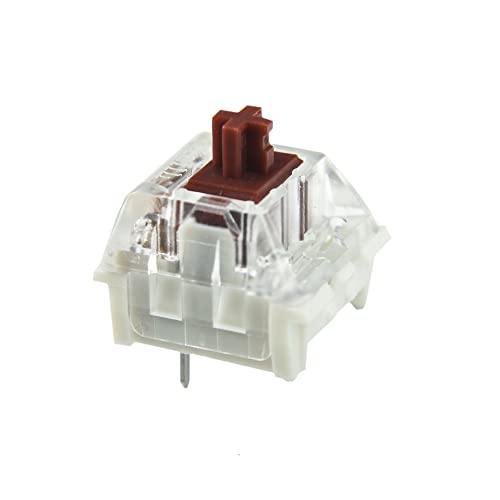 Kailh Box switches are the latest volume switch silent box solution from Kailh. These switches are designed for gaming or industrial applications that demand silent switches.

Designed for use on boards, boxes, and systems that require a silent, unobtrusive switch: like the ones found on keyboards, the Kailh Box Silent switches are a perfect choice.

The switches feature a sealed internal design that employs a shock-absorbing system to protect the internal components from the natural wear and tear caused by continuous operation.

As a result, the switches are designed to be durable, lasting for 50 million keystrokes.

The switches are also designed to be surface-mount LED compatible, hot-swap compatible, and box-type of switches with dampened sound.

Kailh Box Silent Pink Switches are the ones if you prefer silence while typing on your mechanical keyboard.

These are linear switches and are very light to actuate. Gaming and typing would be a breeze in Kailh Box Silent Pink switches.

The bumpy feeling is decent considering the lower price segment.

Here are the detailed specs in tabular format:

Here are the Kailh Box Silent Switches available at Amazon: 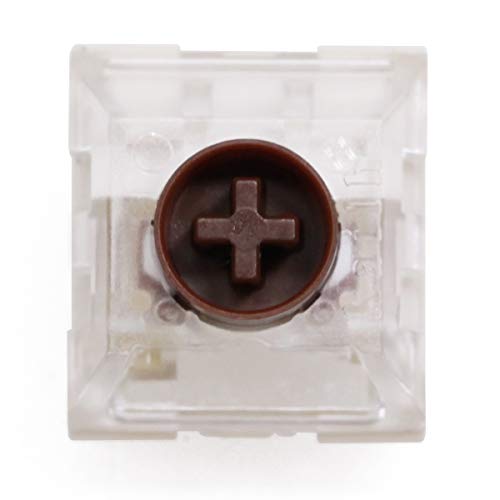 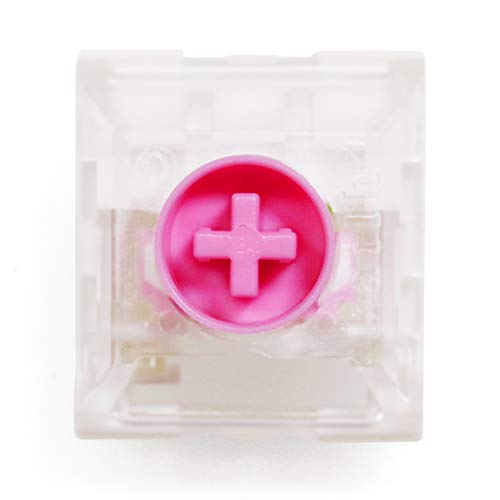 We don’t always like high-profile switches. Kailh Low-Profile Choc Switches for Laptop is the first on the market with a switch contact system based on the patented “BOX” technology of a mechanical switch.

Compared to the standard Choc Switches, the Low-Profile Choc Switches are thinner, shorter, and lighter, allowing for an even lower-key position or reducing the thickness of the keyboard design.

Kailh Low profile switches are great for laptops that use mechanical switches on their keyboard.

The Kailh Choc White switches are clicky and actuate at 50g which is good enough. If you are a Cherry MX Blue switch fan, then you will like it.

The Kailh Choc Brown switches are tactile low-profile switches from Kailh. You will get enough bumpy experience without noisy clicks from this switch.

The Kailh Choc Red switches are low-profile linear switches from Kailh. It is a good offering with an actuation force of only 45g. With this low-profile switch, gaming will be a breeze.

Here is the detailed information about these switches’ specs below:

The Kailh Pro series of switches is a noteworthy stride in keyboard switch technology. The Kailh Pro is the switch of choice for speed-typing and quick-key actions.

Available in standard sizes, the Kailh Pro comes in both modern and newly developed low-profile designs.

A plus for all you clicky-clackers out there, Kailh Pro switches feature an earlier activation time than most industry-standard switches.

Select the right switch for your next build and get in there and type!

Kailh Pro Burgandy is an excellent Linear switch from the Kailh Pro range. It is very fast and easily actuated with an actuation force of 35g.

You would love the tactile feel it produces and feels much similar as the MX Browns.

Kailh Pro Light Green switches are Clicky ones with an Actuation force of 50g and produce a good clicky actuation.

Here are the Kailh Box Silent Switches available at Amazon: 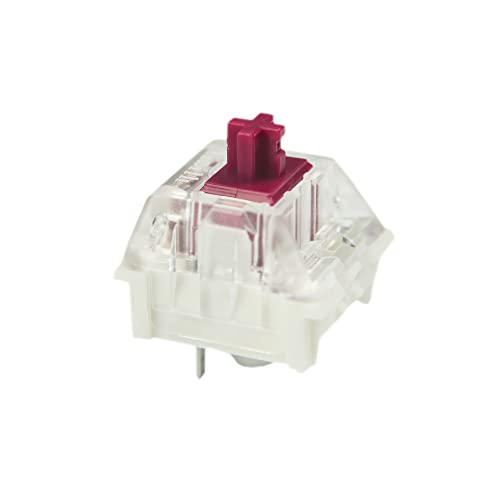 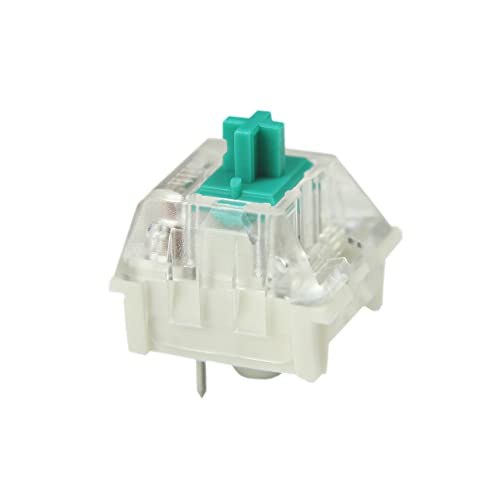 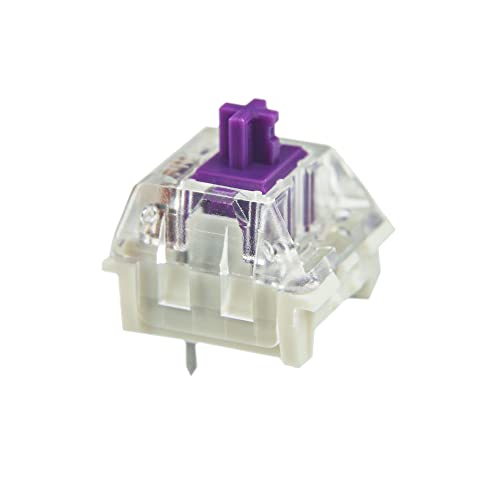 The Kailh mechanical keyboard switch has many benefits, including its low price point, longevity, and attractive appearance.

Overall, the Kailh switch is an attractive one that has attracted many mechanical keyboard users.

Hot-swapping means that you can change them while the system is on. This is very useful for gamers because they can change the keycaps on their mechanical keyboards while the computer is on.

No need to turn off the computer to change the keycaps.

We can’t be sure if it’s intentional or not. It’s possible that Kailh wants to keep the switches locked in the keyboard to prevent tampering, but it doesn’t make much sense to make them so difficult to remove.

So, it depends on the mounting you do while you place the switches on your keyboard.

Are Kailh switches better than Cherry?

Cherry MX Switches are the typical switch used by mechanical keyboards. They are often considered the gold standard for keyboard switches.

Considering the price point, we can say the Kailh switches are better than Cherry. However, in terms of performance and longevity, the Cherry MX is the better one.

The Kailh switches are popular as they are much cheaper with good quality.

Are Kailh switches better than Gateron?

However, in terms of overall quality and experience, the Gaterons have the edge over the Kailh switches.

Still, the Kailh switches are considered good for the price we pay for.

How fast are Kailh speed switches?

Kailh speed switches are very fast as they are linear switches and have a travel distance of 1.2 mm. Their response time is speedy due to its low actuation and is very good for gaming.

Kailh speed silver has lower actuation as compared to the other Kailh switch variants.

Can you put Cherry MX keycaps on Kailh switches?

Kailh switches like Kailh BOX White, Navy, and Jade are clicky switches and are loud. However, other tactile and linear variants of Kailh switches are not noisy.

Which Kailh switches are the quietest?

Kailh linear variants are the quietest among the Kailh Switches. It includes Kailh Box Dark Yellow, Kailh Box Black, and Kailh Box Red in the Box switches from Kailh.

Kailh has an optical switch variant that is similar to the Kailh Box switch. The difference it has is it does not have a physical contact module like the Box switches.

In this guide, I covered in detail the Kailh switches and how they perform with detailed specifications. You should have a good idea of what switch is best for you from the Kailh switch range.