Gateron Brown and Cherry Brown are one of the two most popular tactile switches.

Both switches are tactile, but they have some key differences. So, which one is the better switch?

These switches are “tactile” because they have a noticeable bump when you actuate them.

This bump indicates that you have activated the switch and registered the keystroke.

Gateron, a company based in China manufactures Gateron Brown switches.

These switches are clones of Cherry MX Browns, but they have a few minor differences.

Cherry is a company based in Germany that manufactures Cherry Brown switches.

In this post, I would cover the comparison of the two tactile switches Gateron Brown vs Cherry Brown.

I would consider various factors like durability, performance, build quality, and more.

In short, the Cherry MX Browns feel lighter to actuate than Gateron Browns.

However, they have better tactile feedback than the Gateron Browns.

Also, the durability of Cherry MX Browns is better.

The Gateron Browns have an added smoothness than Cherry MX Browns.

Let’s get started to find which wins over the other!

Keyboard enthusiasts choose Gateron Setup switches due to their nice, responsive tactile feedback. They are inexpensive too.

They are also affordable, making them a popular choice for budget-minded buyers.

One downside to Gateron Browns is that they can be stiffer than some other switch types.

This can make them difficult to press for users with smaller hands.

Also, it is difficult to press for those who are not used to tactile switches.

Additionally, the switches can be pretty loud, which may not be ideal for some users.

Gateron Browns are a good option as an affordable switch with tactile feedback.

They may not be perfect for everyone, but they will please many buyers.

You can check the full Gateron Brown review here. 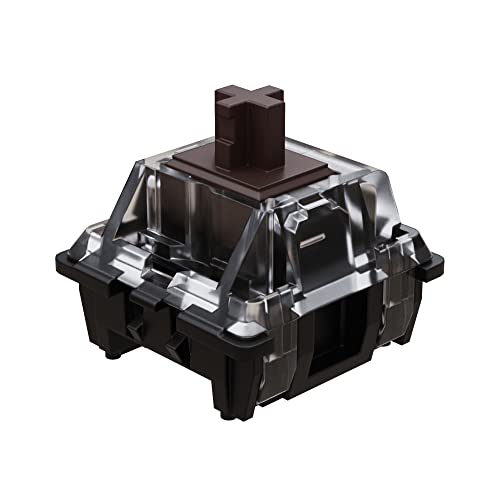 The Cherry MX Brown keyboard switch is one of the most popular switches on the market.

It has a medium resistance, making it a good option for gaming and typing.

The MX Brown has a light actuation force of 45g and is quiet when depressed.

The Browns are tactile, meaning you feel a bump when you press them, and this lets you know that you have activated the key.

This can be helpful for gaming, as you don’t have to keep looking down at your keyboard to see if you have hit the key.

The Cherry MX Brown is suitable for people who want tactile feedback with less noise.

The light actuation force also makes it easy to press many keys at once. 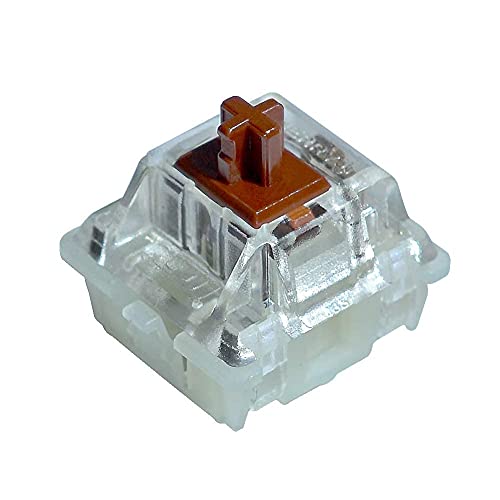 When comparing mechanical switches, durability comparison is a crucial factor.

They’re rated for 100 million clicks, compared to the Gateron Brown switch’s lifespan of only 50 million.

But, in practice, this may not be as big of a difference as you might think.

This number indicates that Cherry Browns are more durable than Gateron browns. Yet, the Gateron Browns are not bad in durability either.

Feedback of switches is a must consider as it can make or break the experience.

So, which has better tactile feedback?

They are both tactile and have medium resistance. Yet, they feel different to type on.

So, which switch type is best for gaming? Cherry MX Brown or the Gateron Brown?

Some gamers prefer the Cherry MX Browns due to the tactile feedback.

They are also considered one of the most durable switches available.

Even the Gateron Browns perform well in gaming.

So, it is a personal preference to choose one of them.

Cherry MX Brown is a popular switch for typing, and Gateron Brown is also well-loved.

So, which one is better for typing?

Some people like the MX Brown’s feel, while others like the smoothness you get with the Gateron Browns.

I’ve tried both switches, and I prefer the Gateron Brown switch.

The Gateron Browns feel better during typing as they have a bumpy feeling with a smooth touch.

Which is better: Gateron Brown or Cherry Brown?

It cannot be easy to pick between Cherry Brown and Gateron Brown.

Both switches have their benefits and drawbacks, so it can be hard to determine which one is the best for you.

Gateron Browns are known for their smooth feel and tactile feedback.

They are also quiet, making them a good option for people who want a keyboard that doesn’t make much noise. But, they can be prone to chatter, which can be annoying for some people.

Cherry Browns are known for their reliability and durability.

But, they can be pretty loud, which may not be ideal for some users.

So, Which switch is better? That depends on your preferences.

Cherry MX Brown is better for the switch’s quality, reliability, and durability.

The bump on the Cherry MX browns is incredible.

Gateron Brown is better if you are on a budget and want smooth actuation with a little tactile bump.

But you won’t get enough tactility in Gateron Browns.

Having the tactile bump is more critical than the smoothness of clicks for a tactile switch.

So, I would recommend Cherry MX Browns over Gateron Browns.

Is Gateron Switches better than Cherry?

The debate between Cherry MX switches and Gateron switches has been heated for some time now.

Some people swear by the Cherry MX switches, while others prefer the Gateron switches. So, which one is better?

But, the Gateron switches are excellent as an alternative.

They both have a good lineup of mechanical switches of different types. The Gateron switches give a smoother experience.

You can choose a Gateron or a Cherry MX switch to consider the Price or the Durability.

They provide a noticeable bump when you press them down, making them ideal for typing.

No, Cherry Brown is not silent.
They are a type of switch that has a clicking sound when you press the keys.

Q. Can you feel the bump on Gateron Brown?

Yes, you can feel the bump on Gateron Brown switches, but the bump is soft, so it is not much noticeable.

Conclusion: Should you buy Gateron Brown or Cherry Brown?

Let’s conclude the post on Gateron Brown vs Cherry Brown!

They have a similar feel to Cherry MX at a lower price.

They also have a smoother texture to the clicks with a lower bump.

As per experience, the Cherry MX Browns are superior to the Gateron Browns.

Unless you are on a strict budget, you can consider Cherry MX Browns, the ideal tactile switch.