Gaming keyboards have advanced features, a lot of customization, color, lighting effects to utilize as a gamer. These keyboards come at a premium price but are well built.

Let’s find out if they are worth it in this post.

What are Gaming Keyboards?

Are Gaming Keyboards worth it?

Gaming is custom-made advanced built keyboards with gamers in mind having features that include red, green, and blue(RGB) backlights, media controls, and programmable keys. Gaming keyboards are built with quality in mind, and that quality is why it’s worth it.

Also, they often have linear mechanical switches that are the smoothest and fastest and are hard-wearing and more receptive than membrane switches commonly found in standard keyboards.

Do Gaming Keyboards make a difference?

The gaming world is growing, and so is the gaming equipment used to gain an edge over other players. Gaming Keyboards are one such tool.

While Gaming Keyboards are more expensive than standard keyboards, they are more accurate and have faster response times. Their utility is seen in the unique commands that project into a set of commands that can perform a task, and this is why professional gamers use them during competitions.

See also  Mechanical vs Membrane keyboard: Which is better?

Why would you choose Gaming Keyboards over normal keyboards?

Gaming keyboards have a lot of benefits over traditional keyboards. While they may cost more, they are often designed to be more comfortable to use, with customizable backlighting and some even having programmable buttons and macros that you can use in-game.

Additionally, many gaming keyboards have USB ports on the keyboard itself and built-in audio

jacks for headsets, which are very useful for gaming.

Here is my favorite gaming keyboard: 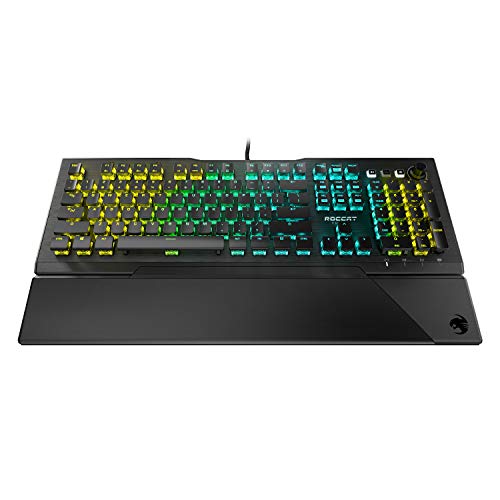 One of those features is programmable macro buttons. Not all gaming keyboards have these, but more and more do, and they’re a big deal.

You can use the macro buttons to launch frequently used programs, open web pages, or even complex sequences of actions. These buttons give you the option to have a series of keystrokes or mouse clicks executed whenever you press a single button (or multiple buttons in some cases).

This is a great way to make your software or game hotkeys easier to access, and in some cases, even more powerful.

Gaming keyboards have customizable backlighting to change the backlight colors to match your setup.

Backlit illumination is a feature that lets you see the keys on your keyboard in the dark. You can customize your keyboard’s backlighting with different colors and designs, which enables you to create a unique theme on your keyboard.

Backlighting is an excellent feature that you see in a gaming keyboard compared to a regular keyboard, and it makes it worth it.

Gaming keyboards are commonly connected to computers for use in online gaming by individuals worldwide. However, other factors make them appealing as well.

Here are the advantages of Gaming keyboards:

Gaming keyboards are very common among PC enthusiasts, as they are specially designed to offer different features. However, there are some disadvantages that you need to take into account because they may affect your experience:

Let’s conclude the post on if gaming keyboards are worth it.

We know that gaming keyboards are expensive and that many gamers are saving their money for more important things like a top-notch gaming monitor or a complete gaming PC.

Whether you’re a casual gamer or a hardcore gamer, everyone knows a good gaming keyboard is one of the most important things to have when playing video games. A gaming keyboard may be worth it if you play many games that require a lot of movement.

Hi, I am Anirban Saha(B.Tech in ECE), the Founder and Editor of Techbullish.

Techbullish is a one-stop destination for your computer peripheral buying guide.

If you are looking for any computer accessories like keyboards, mouses, printers, etc. you would indeed find the trusted guide written by Anirban Saha here.